What are tariffs and restrictions in global trade?

Global trade allows countries from all over the world to access goods and services they would otherwise be unable to produce. Without it, nations wouldn’t be able to function effectively, so much so that every country in the world imports goods.

However, sometimes countries want to put restrictions on certain imports. To do this, governments apply trade barriers like tariffs on specific goods and services.

In this article, we’ll be looking into the different types of trade barriers that governments use, why they use them and how they impact businesses and individuals.

What are trade barriers?

For the purpose of this article, we’ll be breaking trade barriers down into two categories: tariffs and non-tariff barriers. Governments use either or both depending on their goals.

Put simply, a tariff is a tax imposed by a nation on imported goods and services. In the UK, HM Revenue and Customs (HMRC) collects tariff fees which boost government revenue.

When governments impose tariffs, goods and services from abroad become more expensive for businesses and individuals. This makes them less attractive to domestic consumers.

Tariffs indirectly affect the exporting country as domestic consumers are put off by the rising costs. If domestic consumers still have an interest in the good or service, they will have to embrace the higher fees. These inflated prices are sometimes referred to as artificial prices.

Consumers also face the issue of less choice under tariffs. Restrictions on imports limit the variety of a certain good or service available to them. With less competition, the quality of output from domestic producers may drop.

However, businesses at home may see the restricted good or service as an opportunity. The lack of competition from abroad may entice more domestic producers. This creates job opportunities and lifts domestic employment.

The diagram below shows the effects of higher import costs from tariffs. 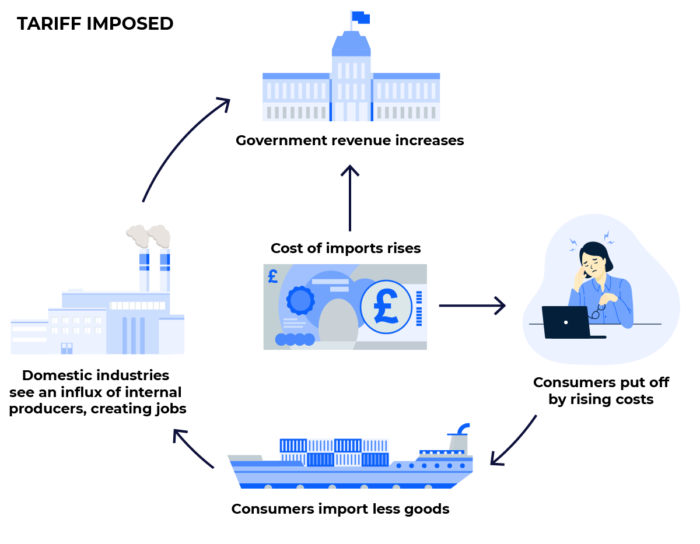 Why do governments impose tariffs?

Here are a few key reasons why governments impose tariffs:

We mentioned earlier how job opportunities are created when more domestic producers are interested in restricted goods and services. But tariffs help to shield employment in other ways, too.

Domestic businesses in certain industries may find it difficult to compete with companies overseas that use cheap labour. As a result, domestic businesses may look to fire members of their workforce to cut costs. When tariffs are implemented, businesses can keep hold of their staff, thus protecting domestic employment.

Many developing countries or emerging marketing nations use an economic strategy known as Import Substitution Industrialisation. In short, it means relying less on imports from developed countries.

Governments from developing countries may impose tariffs on goods and services in industries where they want to promote domestic growth. The higher import fees create a domestic market for the good or service. Businesses in the industry can thrive without the pressure of competitive pricing.

Sometimes, governments may consider certain goods to be dangerous to their population. For example, the UK imports fish from Iceland. If the UK government has reason to believe the fish is contaminated with disease, it may restrict imports to protect public health.

A government may introduce tariffs against another country if it believes certain rules or agreements have been broken. For instance, ‘Parmigiano Reggiano’ (mistakenly called parmesan all over the world) is protected by law in Italy. For a cheese to be bear the official name it must be made in certain areas of Italy.

If the Italian government believes the UK is allowing its domestic cheese manufacturers to call their hard cheese ‘Parmigiano Reggiano’, it may retaliate with tariffs. This could be restrictions on motor vehicle imports from the UK, for example.

Sanctions are another form of trade barrier that one country may use against another. Unlike tariffs, sanctions are primarily used to achieve foreign policy goals.

In March 2022, major world economies introduced trade sanctions on Russia after it moved military personnel into Ukraine. The purpose of the sanctions was to hurt Russia economically and encourage President Vladimir Putin to withdraw his forces.

Western nations such as the US and UK banned imports of Russian oil, natural gas and coal. The sanctions damaged Russia’s economy but caused global prices to soar. Consumers worldwide faced huge surges in the price energy, heightening inflation fears.

Western governments were prepared to hurt their own economic growth to achieve their foreign policy goals.

Can tariffs be offset by exchange rates?

Tariffs on imported goods affect businesses that trade internationally. Extra costs on imports lose them money. But these businesses may be able to offset the extra costs if currency markets move in their favour.

International trade often requires an exchange of currencies. Currency values appreciate and depreciate based on a variety of factors. If a currency value shifts in a beneficial way for a business, its international payments become cheaper, and it can offset some of the fees from tariffs.

Let’s say a UK business makes cars and imports the majority of its parts from Japan. The business exchanges Great British Pounds (GBP) for Japanese Yen (JPY) to make payments. At the time, the exchange rate between GBP and JPY is 152.50.

However, during this time, GBP appreciates against JPY. This means one GBP now buys more JPY.

Therefore, GBP’s appreciation against JPY has saved the business £200 for each car. The saving shows how exchange rates can offset the additional costs of tariffs on businesses.

In this example, the business benefitted from fortunate market movement. With the right foreign exchange (FX) strategy, businesses can maximise the opportunities and minimise the risks of the ever-moving currency markets.

Privalgo’s Foreign Exchange Specialists are experts in helping businesses create an invaluable FX strategy. To find out more, request a callback and one of our Specialists will be in touch.

How do tariffs work?

Tariffs typically come in one of two forms: specific or ad valorem. A specific tariff is a fee added to one unit of a good, such as £1000 for each car imported.

An ad valorem tariff is levied based on a percentage of a good’s value. For instance, a 15% ad valorem tariff on Japanese cars imported to the UK means a £10,000 car would now cost the consumer £11,500. The price has increased by 15%.

The graph below shows how global trade works without any tariffs in place. DD resembles domestic demand, DS is domestic supply, WS is world supply, P is domestic price and P* is world price. 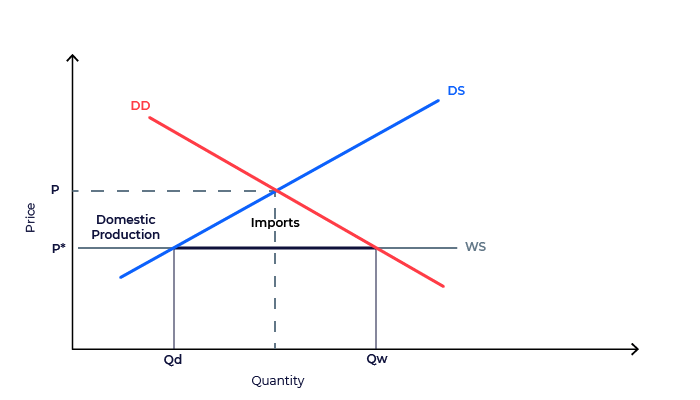 However, due to low prices, computers are in high demand with consumers. They, therefore, want to purchase more than is domestically possible. This is shown at point Qw on the graph.

As a result, the nation producing computers will have to purchase more units to meet demand. The amount they import is the difference between Qd and Qw.

Now, when tariffs are introduced, the graph experiences some changes. 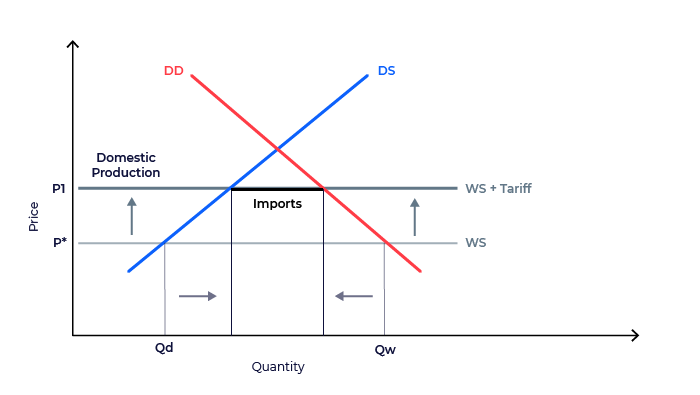 In the diagram, a tariff has been imposed that means computers from abroad now cost more money. P* has pushed up to P1.

In response, domestic production increases as more domestic manufacturers are interested in making computers. They no longer have to compete with the low world price. Therefore, Qd moves to the right as more computers are built internally at the higher price.

Because the gap between Qd and Qw has shrunk, the country now needs to import fewer computers to meet demand. The tariff has been successful at increasing the price and reducing the number of imported computers.

In general, free trade is seen as a beneficial world development. It improves the quality and variation of goods and services for consumers and makes them cheaper, too. Also, businesses can trade with countries across the globe. But free trade does have its cynics.

Donald Trump’s presidential campaign was critical of free trade agreements. In 2018, the Trump administration imposed tariffs worth billions of dollars on Chinese imports. China responded with tariffs on steel, pork and other goods imported from the US.

Towards the end of 2018, China went like for like with the US’s $16 billion tariffs on Chinese imports. It introduced $16 billion worth of tariffs on US goods including crude oil and motor vehicles.

The US also applied restrictions to steel and aluminium from the EU, Canada and Mexico.

Trump’s tariffs were the largest restrictions imposed by the US since World War Two. He had a variety of reasons for imposing his tariffs.

To name a few, he wanted to bring back jobs he felt had been lost to foreign countries, retaliate to tariffs placed by other nations on the US and balance the trade deficit.

What are non-tariff barriers?

Except for the Trump administration, tariffs have become irregular in modern-day global trade. Institutions such as the World Trade Organisation (WTO) promote free trade and create roadblocks for countries wanting to levy tariffs and taxes on imports.

Instead, countries have turned their attention to non-tariff barriers. Here are some examples:

Governments restrict certain goods that require a license for importation. For example, a license is required to ship plants into the UK from abroad. These licenses are granted to specific businesses to limit competition. The result is higher prices for consumers.

An import quota limits the amount of a particular good that can be imported. For instance, a government may apply an import quota to the amount of pork that businesses can bring into the country. With less pork available, but the same consumer demand, prices will rise.

Unlike the other trade barriers we’ve explored in this article, VERs are imposed by the exporting nation, not the importing one. However, they are usually requested by the importing nation and are often greeted by a reciprocal VER. This is why they’re known as ‘voluntary’.

Let’s say Kenya limits its tea exports to the UK based on a request from the UK. In response, the UK issues a VER on its machinery exports to Kenya. This hikes the price of tea and machinery but protects domestic industries.

As we’ve established, one of the main goals of trade barriers is to protect domestic industries. A local content requirement on a good means a percentage of the good or the good’s value must be made domestically.

For example, a local content requirement on the import of computers means 30% of computer parts must be made internally. Alternatively, the restriction may require 20% of the value of each computer to come from domestically produced components.