Currency values are the beating heart of the foreign exchange (FX) market. They are constantly moving, and sudden changes can have dramatic effects on economies, businesses and financial markets. In this article, we’re delving into the causes of currency appreciation and depreciation, and how important FX volatility is for businesses.

Currencies are traded on a floating rate exchange system in the FX market. Their values appreciate (go up) and depreciate (go down) based on supply and demand.

Unlike stocks, the market price of currencies isn’t based on intrinsic value. Instead, currencies are traded in pairs and the exchange rate between two currencies represents their value.

Currency pairs are written as fractions. On one side of the fraction, we have a base currency. On the other, we have a counter currency.

In this example, the pound is the base currency, and the euro is the counter currency. Thus, one pound is equal to 1.1979 euros.

Currency appreciation means the base currency has become more valuable against the counter currency.

Let’s say GBP/EUR has shifted to 1.2004, increasing by 25 pips. You can now buy 1.2004 euros with one pound. Therefore, the pound has appreciated against the euro.

Currency depreciation is the reverse effect. If GBP/EUR drops by 25 pips to 1.1954, one pound is now equal to less euros that it was before. It has depreciated against the euro.

Read: How do pips and pipettes work in foreign exchange? 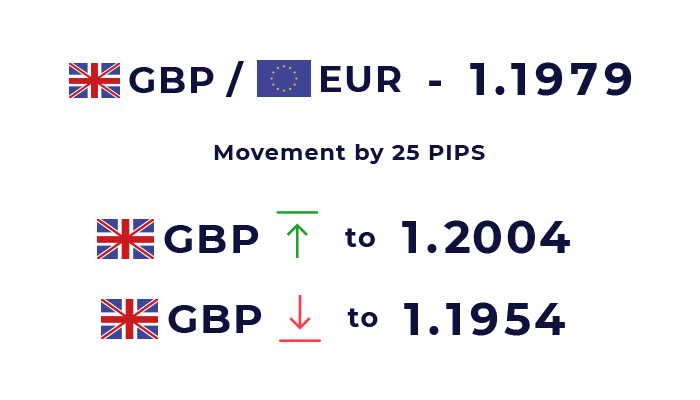 A currency’s value appreciates when it experiences a positive shift in supply and demand. There are plenty of ways a currency can get a boost. Here are a few of them using the UK and pound sterling as an example:

When a nation’s central bank increases interest rates, investors get a better return on their savings in that country.

So, if the Bank of England was to hike interest rates, saving money in UK banks becomes more appealing. Investors who chase the best rates may pour their money into UK banks. They capitalise on the new, higher bank rates.

When large amounts of money surge into UK banks from abroad, this is known as hot money flows. The urge to save in UK banks means an increase in demand for sterling.

If a British business receives investment from abroad, the value of sterling goes up. This could be from a major investment, such as building a new factory to produce goods in the UK.

It could also be a significant takeover bid for a British business – the purchase of a Premier League football club by Saudi Arabian investors, for example.

Purchase of UK goods and services

When people from abroad buy British goods and services, there is an increase in demand for sterling.

Let’s assume there’s a surge in Europeans wanting to buy UK-made cars. The British manufacturers may only accept their payments in pounds. So, the buyers must exchange their euros for pounds to buy a car. Demand for sterling increases.

Alternatively, there might be an influx of Chinese tourists visiting the UK. Staying in hotels, eating in restaurants and purchasing souvenirs requires the British currency. The Chinese tourists will need to change yuan into sterling, thus pushing demand for the pound.

We can apply these examples to the supply and demand graph below. The graph shows how an outward shift in demand for the pound increases its value. 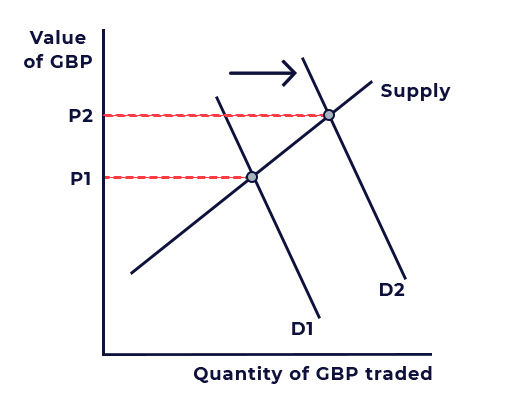 Assuming all other things remain the same, the purchase of British goods and services from people abroad lifts sterling’s demand from D1 to D2 on the graph. The result is an increase in value of GBP, shifting from P1 to P2 on the graph.

A negative movement in supply and demand causes a currency’s value to depreciate. There are numerous factors that can influence this. Let’s look at some examples:

An uncertain or unstable political landscape can have detrimental effects on a currency’s demand. In 2016, the UK voted to leave the European Union. Though not impossible, the decision was unexpected, and the resulting uncertainty drove investors away from British assets.

Demand for the pound dropped significantly in the 24 hours following the vote. Sterling depreciated by more than 8% against the euro and almost 12% against the dollar.

Investors tangle with risk constantly. Often, they want to keep their money in safe places. If investors withdraw their money from a country deemed unsafe, the value of its currency will depreciate.

Typically, when uncertainty is high, riskier assets like stocks suffer and safer assets like government bonds thrive. Also, the foreign exchange market considers some currencies to be safer than others. These are commonly referred to as risk-off or safe haven currencies.

In times of uncertainty, like black swan events, investors flee to currencies that are considered safe. During the financial crisis in 2008, risk-on currencies massively depreciated. The pound (risk-on) suffered greatly against the dollar (risk-off) and Japanese yen (risk-off).

Read: What are black swan events and how do they affect foreign exchange?

We talked earlier about how interest rate hikes contribute to currency appreciation. The reverse effect happens when a central bank decreases interest rates.

If the Federal Reserve (the US central bank) reduces the bank rate, the dollar becomes less desirable. Investors get a better return elsewhere, resulting in an outflow of hot money from the US.

Traders then sell the dollar in currency markets, leading to an increase in supply. The low demand for the dollar, and high supply, means its value depreciates.

Exchange rate changes directly impact the value of a nation’s imports and exports. These can have both positive and negative effects on the economy. Let’s break them down.

Effects of currency appreciation on imports and exports

For this example, we’ll use the dollar (USD) and the euro (EUR). If the dollar appreciates against the euro, the US experiences a rise in external purchasing power. One dollar goes further, so goods imported from EU countries become cheaper.

As a result, demand for EU goods to the US increases. More affordable goods means lower prices, therefore contributing to lower inflation.

However, an appreciating USD/EUR means US goods become more expensive in Europe. Demand for US goods drops, resulting in fewer exports. A reduction in the value of exports compared to imports means the US has a trade deficit. This may lead to a slowdown in economic growth.

Effects of currency depreciation on imports and exports

This has multiple economic effects:

These effects lead to an increase in US aggregate demand. All things being the same, currency depreciation can be beneficial for GDP growth. It is hugely important to governments trying to achieve their macroeconomic objectives.

We mentioned earlier that currency values are constantly moving. While this poses challenges for policymakers and economists, it makes life tricky for businesses too.

Volatility is a term synonymous with foreign exchange. There are a multitude of factors that contribute to currency appreciation and depreciation. And often these are out of our control.

How do exchange rates affect businesses?

For businesses, exchange rate volatility can be crucial to profitability. Let’s imagine a German car manufacturer has settled on a deal to purchase essential parts from a supplier in the UK. The price has been agreed, but the actual transaction won’t be processed for another six months.

Within the six-month period, the euro depreciates against the pound. This means one euro is now worth less than it was when the two businesses shook hands on a deal.

This example shows how businesses can suffer at the hands of exchange rate volatility. But it can work in their favour, too. If the euro had appreciated at the same rate against the pound, the German car manufacturer would have benefitted from the currency movement.

Read: What is foreign exchange risk and how does it affect businesses?

You might think there’s little businesses can do to protect against exchange rate volatility. But you’d be wrong.

With Privalgo’s intelligent financial solutions, you can shield your businesses from market fluctuations and generate maximum value on your international transfers.

We’ll allocate you a dedicated Currency Specialist who’ll get to know you and your business. They’ll walk you through every step of the process and create bespoke strategies to meet your FX requirements.

If you’d like to hear how a Privalgo Currency Specialist can help your business, request a callback.