What are pips and pipettes in foreign exchange?

The world of foreign exchange is loaded with terms that can be confusing. If you’re new to foreign exchange, you might’ve heard of pips and pipettes. But what do they mean?

In this article, we’re running through what pips and pipettes are, how you calculate them and how they work in the real world.

Firstly, let’s break down what ‘pip’ means. Pip is an acronym for ‘percentage in point’ or ‘price interest point’. In the foreign exchange market, a pip is a unit of measurement used to highlight the change in value between two currencies.

A pip is typically the last decimal place in a currency pair’s price. Currency traders use a different number of decimal places depending on the pair they are quoting. Usually, a pip is either the second or fourth decimal place.

For example, when quoting the dollar-yen pair (USD/JPY), traders commonly use just two decimal places. In this case, the second decimal place is the pip.

On the other hand, currency pairs such as the pound-euro (GBP/EUR) are calculated to four decimal places.

Although calculating currency pairs to two and four decimal places is the norm, some currency traders push the boat out to three and five places.

When pairs are calculated to an area outside of the norm, this is known as calculating fractional pips, also called ‘points’ or ‘pipettes’. They have another name too. Because one decimal place is the same as one-tenth of the number before it, pipettes are sometimes referred to as a ‘tenth of a pip’.

Now, if we revisit our previous example of GBP/EUR, this time including a pipette, we’ll be expanding the calculation to a fifth decimal place. So, the pair now becomes 1.19862 – the 0.00002 is one-tenth of a pip or the pipette. 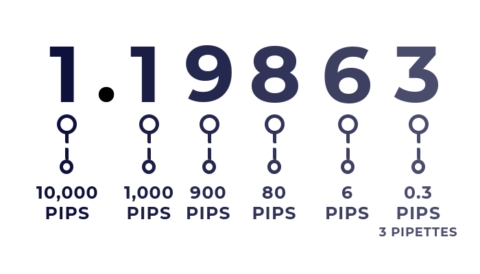 How to calculate pips

As previously mentioned, each currency pair is quoted differently and has its own value. If we want to identify the value of a pip from a certain currency pair, we need to get stuck into some maths.

If we traded 10,000 units of GBP/EUR, then a one pip change to the exchange rate would be approximately a 0.834 GBP change in the position value.

A trader who wants to buy the GBP/EUR pair will be buying pounds and selling euros. Traders will use the term ‘pips’ in reference to the spread between the bid and ask prices of the currency pair and to indicate how much gain or loss can be realised from a trade.

Example of pips in the real world

There are many factors that can affect the value of a currency, and therefore currency pairs. Sometimes, when a nation is experiencing something like hyperinflation or devaluation, trading that nation’s currency becomes chaotic and unmanageable. When this happens, the concept of a pip becomes meaningless.

If we travel back to Germany during the period of the Weimar Republic (between 1918 to 1933), we can see a real-world example of pips losing their relevance. The German mark (D-Mark) was Germany’s currency at the time and was valued at 4.2 marks to 1 dollar prior to the First World War.

However, after WW1, the exchange rate collapsed. In November 1923, 1 dollar was equal to 4.2 trillion marks. The seismic collapse of the German currency meant pips completely lost their value. Why would we need to calculate to four decimal places with the exchange rate of D-Mark/USD at 4,200,000,000,000?

A more recent example of pips losing their importance can be found in Turkey in 2001. During the Turkish economic crisis, the lira was trading as high as 1.6 million to one dollar. Automated trading systems were unable to cope, so the Turkish government removed six zeros from the exchange rate and renamed its currency to the new Turkish lira in 2005.

Although the examples we used above are extreme cases, they do reflect just how volatile currency markets can be. We might not see currencies lose millions in value every day, but we do see constant movement, which can be surprising and creates risk.

Fortunately, there are actions you can take to limit such risks from affecting your international payments. At Privalgo, foreign exchange is what we do. Our intelligent financial solutions keep your payments protected from market movements.

What’s more, our industry-leading rates ensure you’re getting maximum value when you make a transaction.

To find out more about how we can help, request a free chat with a Privalgo Currency Specialist today.