What is a black swan event? Definition and examples

In short, black swans are highly unpredictable events that carry a severe impact.

They are situations that exist outside the realms of possibility, mainly because nothing in the past suggests they are coming. They are events that wildly exceed what is normally expected of a situation.

When black swan events happen, they have an extreme effect. There are many ways this effect can be felt, but we’ll be focusing on events that create an economic impact.

The notion of a black swan was made famous by finance professor, former Wall Street trader, and author Nassim Nicholas Taleb. His book, titled ‘The Black Swan’, suggests some catastrophic events are impossible to predict and trying to foresee them can do more harm than good.

The idea is that, by assuming we can predict black swan events, we leave ourselves more vulnerable to real black swan events. Committing too much attention, effort and money to something we assume is predictable means we’re more likely to get caught out by something entirely unpredictable.

Taleb published the first edition of ‘The Black Swan’ in 2007, just before the financial crisis of 2008. In a later, revised edition, he used the crash to explain how his black swan theory applies to systems as a whole.

The global financial crash in 2008 is an example of what can happen when finance systems are not allowed to fail. By heavily shielding a system from the possibility of failure – to defend against what is deemed predictable – you are making it more vulnerable to serious, devastating loss. It is an example of the illusion of stability.

Black swan theory encourages systems to cater for regular, small knocks to protect themselves from extreme damages. This is a method used by Taleb in his days as a trader. He took frequent, small losses on many of his investments. But his willingness to accept ‘failure’ put him in a strong position to capitalise on dramatic movements – rather than suffer – when they came.

The currency market, like any finance system, is prone to the effects of black swan events. Let’s revisit the financial crisis of 2008 and examine the impact it had on currencies.

If you’ve read or watched Michael Lewis’ ‘The Big Short’, you’ll know that the impending doom of America’s banking system was predicted by a handful of people. However, the collapse deceived most of the American population, and the severity of the crash made it a true black swan event. 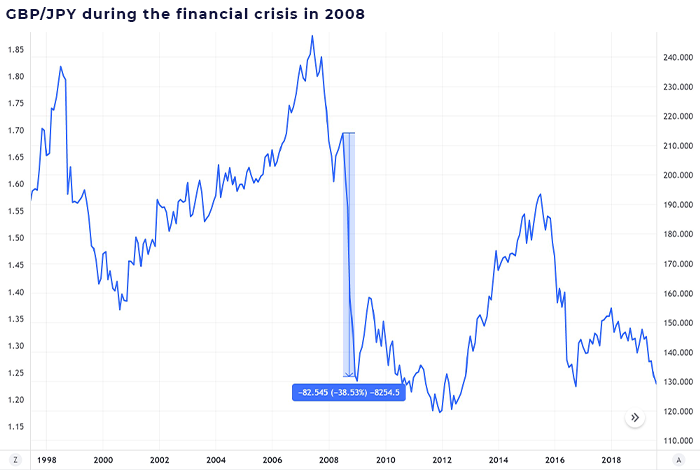 The GBP/JPY currency pair wobbled in July before plunging two months later. Between July and December 2008, the pound had fallen by more than 38% against the yen. The shift remains the most significant movement in the pair’s history.

Similarly, despite the economic crash occurring on American soil, the risk-off US dollar (USD) made substantial gains against riskier currencies. 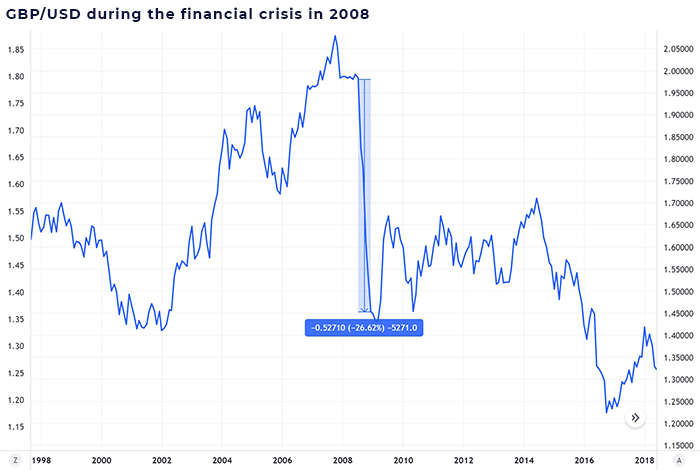 Movements like this are extreme in currency trading. The impact of black swan events like the 2008 financial crisis can have significant effects on the currency markets.

Protect your business against FX uncertainty

So far, we’ve only spoken about one example of a black swan event. But there are plenty more we can look into.

In 2008, Zimbabwe experienced one of the worst cases of hyperinflation in history. Although inflation had strangled its currency for over a decade, when hyperinflation eventually kicked in, the value of the Zimbabwean dollar collapsed.

Zimbabwe reached a peak inflation rate of 79.6 billion per cent – a level so severe that it had to abandon its old money and temporarily adopt foreign currencies. It’s almost impossible to predict such a catastrophic level of inflation.

The dotcom bubble of 2001 is another black swan event. The rapid technological advances of the 1990s had investors purring at up-and-coming tech businesses. The Internet was the new kid on the block and created massive overvaluations of such companies.

Investment funds pumped vast amounts of money into tech businesses that failed to deliver the goods. The companies folded, and funds were hit hard. Eventually, the bubble burst and the American economy plummeted. The nature of the new digital world made the dotcom bubble unpredictable, and the impact devastating.

Importantly, not all black swan events are bad. The definition of a black swan event states that it has an extreme impact. This isn’t always a negative thing. For example, the surprisingly strong growth of the Nasdaq stock exchange in the late 1990s can be described as a black swan event.

In general, positive black swans take a bit more time to show their effects. The growth of the Nasdaq took a few years in the 1990s but looks sharp on a historical timeline. 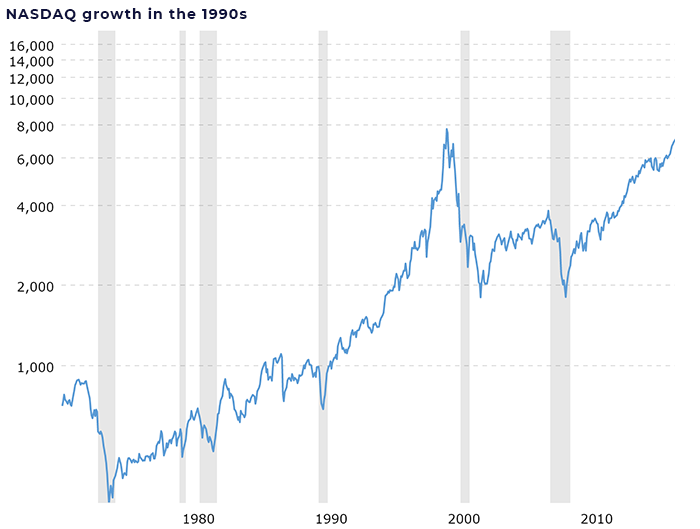 Despite the growth eventually leading to the dotcom bubble, the Nasdaq’s progress through the 90s will have brought some positivity on its way.

Was Covid-19 a black swan event?

It was heavily documented that Bill Gates and Laurie Garrett predicted the global spread of Covid-19. And a worldwide pandemic came as no surprise to some institutions.

According to Sports Pro Media, the All England Lawn Tennis Club (the organisers of Wimbledon) had been paying into pandemic insurance since 2003, and received a tournament cancellation payout of £157m in 2020.

Another person to have predicted the Covid-19 pandemic was Nassim Nicholas Taleb.

He co-wrote a paper on 26th January 2020 (when the Covid-19 was only in China), warning governments about the risks of the virus. According to Taleb and his co-authors, the key factors that made the Covid-19 pandemic predictable were increased connectivity and nonlinearity.

The nonlinear nature of the virus (its unknown contagiousness, severity and ability to mutate), combined with our worldwide connectivity, created the perfect recipe for a global pandemic.

Because of this predictability, Taleb – the pioneer of the term ‘black swan’ – is adamant that the Covid-19 pandemic is not a black swan event.

What is a grey swan event?

We’ve already suggested that the Covid-19 pandemic is a grey swan event, so let’s compare it to some other examples.

When the UK voted to leave the European Union in June 2016, the value of the pound plummeted. Within 24 hours of the announcement, the pound dropped over 8% against the euro and just under 12% against the dollar.

The watching world was well aware of the possibility of a leave victory. But the strong unlikelihood of the outcome resulted in profound effects. It was a grey swan event.

Similarly, when Donald Trump walked away victorious from the US presidential election in November 2016, it was not an unpredictable event – but a highly improbable one. The impact on society was substantial.

So, where there are similarities between black swans and grey swans, there are also noticeable differences. But without question, both possess the power to have drastic impacts on the world around us. And chances are, we won’t even see them coming.

Protect against unpredictability with Privalgo

As we’ve made very clear in this article, trying to predict black swan events can have dangerous consequences. But protecting yourself from unpredictable currency markets is essential.

The currency markets are constantly moving. And although their daily changes aren’t as dramatic as seen in black swan events, they are significant nonetheless. Keeping track of market movements can be confusing and time consuming. And what’s more, missing crucial opportunities can lose you money.

Fortunately, there are actions you can take to limit such risks from affecting your international payments. At Privalgo, our intelligent financial solutions keep your payments protected from market movements. What’s more, our industry-leading rates ensure you’re getting maximum value when you make a transaction.

To find out more about how we can help, request a free chat with a Privalgo Currency Specialist today.

What are tariffs and restrictions in global trade?
What is forward guidance in FX?