3 Peaks Challenge: the good, the bad and the ugly

It’s been almost four weeks since we embarked on our Three Peaks Challenge. And after some reflection, we felt the time was right to share our experience.

In honour of Save the Children, we set out to complete the 48-hour Three Peaks Challenge. Our mission was simple: reach the top of the tallest mountains of Scotland, England and Wales within 48 hours of our starting point. 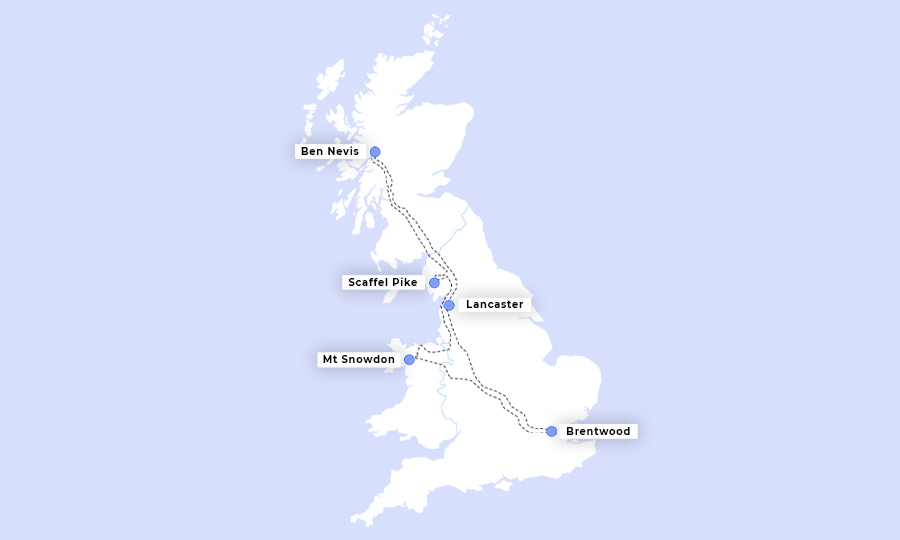 We’d have to factor in the driving time between each location as well as when we could sleep. Our team consisted of 11 unsuspecting Privalgo explorers with very limited hiking experience. Safe to say, it made for an interesting adventure.

Our journey began in Brentwood, Essex on Thursday 28th October. Before us lay over 250 miles of stunning English motorway to Lancaster, our first destination. We’d only be in the Northwest English city for a short while – staying the night before waking up bright and early to make our way to Scotland.

The agenda for Friday morning felt slightly déjà vu: 250-plus miles of motorways and A-roads to the base of Ben Nevis in Fort William, Scotland. This time, however, there was no sarcasm in describing the Scottish drive as stunning.

We ventured deep into the western end of the Grampian Mountains where we found our first foe: Ben Nevis. Standing at 1,345 metres, the Scottish giant is the highest peak in the British Isles and the tallest in our challenge. With the team fighting fit, we figured we should take on the biggest bully first.

The highest point in the British Isles

Naturally, late October in Scotland meant the weather was on the chilly side and we were told of snow at the top. We wrapped up as though we were tackling Everest, filled ourselves with cups of tea from the gas stove and started the clock. 1pm on Friday 29th October. To be successful in our mission, we’d need to be at the top of our final mountain before 1pm on Sunday 31st October.

We began our ascent and almost immediately started removing layers of jackets and jumpers. We’d need them at the top, though. The terrain varied from stone paths to jagged rocks and the scenery of grassy plains and mesmerising lochs was certainly something to behold.

The steep paths in the final third of the ascent were tough. The air was thinning, and our untrained legs were starting to feel sore. Our spirits took a knock when some fellow walkers making their way down informed us that we’d “broken the back of it” when we asked how far to the top. Not the 10 minutes we were hoping for.

But we persevered – and as we neared the peak, the snow came. Fortunately, there was little wind, meaning the snowy conditions were more of the magical variety than a brutal blizzard. Clambering over the rugged, snow-covered rocks, we ventured down the final stretch to the summit – which was marked by a solid cairn.

Atop of Ben Nevis, we rolled out our banner and cracked open a couple of ice-cold Belgian lagers in celebration. 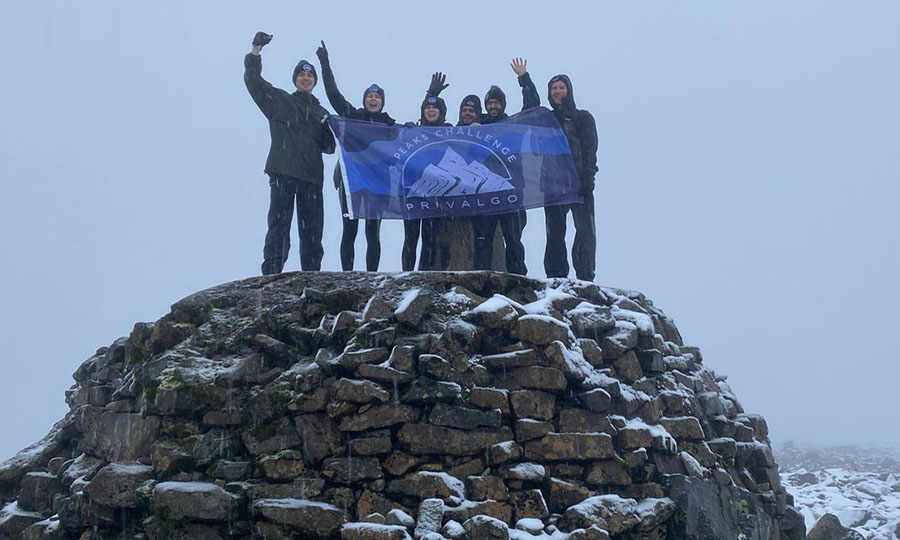 Down in the darkness

The time was 5pm, meaning our trip to the top had taken almost exactly four hours. Feeling smug as the highest people anywhere in the UK, we regrouped and headed down the mountain.

We knew what to expect from the way up and were confident we could make it down in good time. But Mother Nature threw us a curveball, turning off the lights and sending us towards the bottom in darkness. In professional hiker fashion, we used a combination of head torches, phone lights and pure gut instinct to get back to base.

Spurred on by the prospect of a pint and a burger at the Ben Nevis Inn, the team pushed through the pain. We arrived at the pub just before 8:30pm, battered, broken but ready to do it all over again.

We woke before sunrise on Saturday morning and began the 250-mile journey to the Lake District. Our next beast – Scafell Pike – measures 978 metres in height and is the tallest mountain in England.

There’s no denying we were feeling slightly worse for wear and flutters of apprehension made their way through the team. But as we made our way into the breathtaking mountains of the Lake District, the sun was shining down, and our morale was sky-high.

The small, windy roads through the national park were great fun and an ideal change from the never-ending tarmac of the M6. Unfortunately for us, the roads were feeling mischievous.

About a mile and a half short of the foot of Scafell Pike, the wheels on the left side of our van hit some roadside rocks – and the damage was substantial. 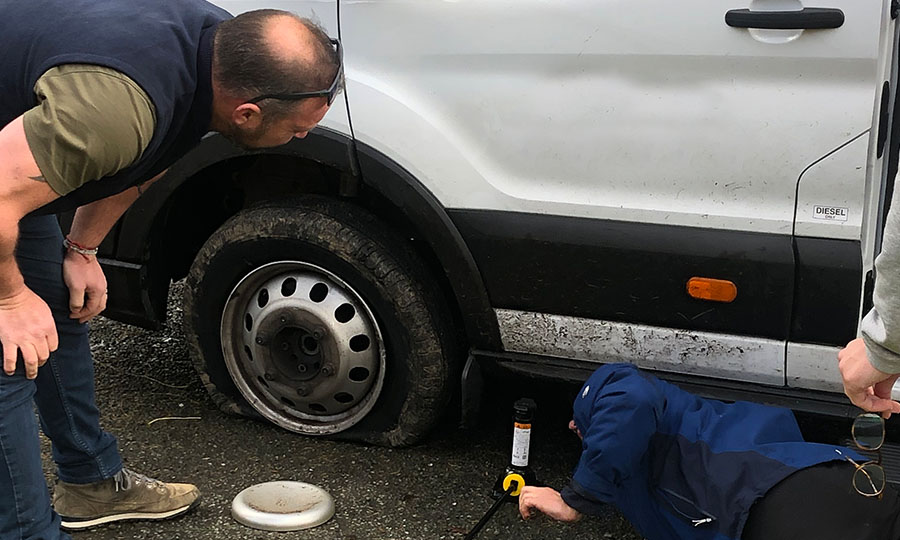 Our team transformed into makeshift mechanics and, with the help of a pump generously loaned by a nearby couple, we were back on track.

The pit stop had knocked back our start time, meaning we kicked off our Scafell Pike ascent around 2:30pm. The delay meant we’d have to climb down in the dark, prompting locals to strongly advise against a trip to the top. Mainly, this was due to fears over the mountain’s rivers being too dangerous to cross once the sun sets.

However, unlike the overcast skies of Scotland, the Lake District was soaked in sunshine. We were cautious, but full of optimism and made our way to the foot of the Scafell.

We journeyed up the grassy mountain, stopping occasionally for a sip of water and a chinwag with the local sheep. The slightly warmer weather was a bit of a blessing and the absence of rain made it an enjoyable start.

The paths were long and steep, but our weakened legs were holding up. Our route to the summit became ambiguous as we approached the top. The clear grassy path moulded into a pile-up of shattered rock and stone, forcing us to rely on a series of methodically placed cairns for guidance.

The weather turned cold and the wind picked up as we eyed the peak. But we were well prepared and brushed off the elements to claim our next scalp. 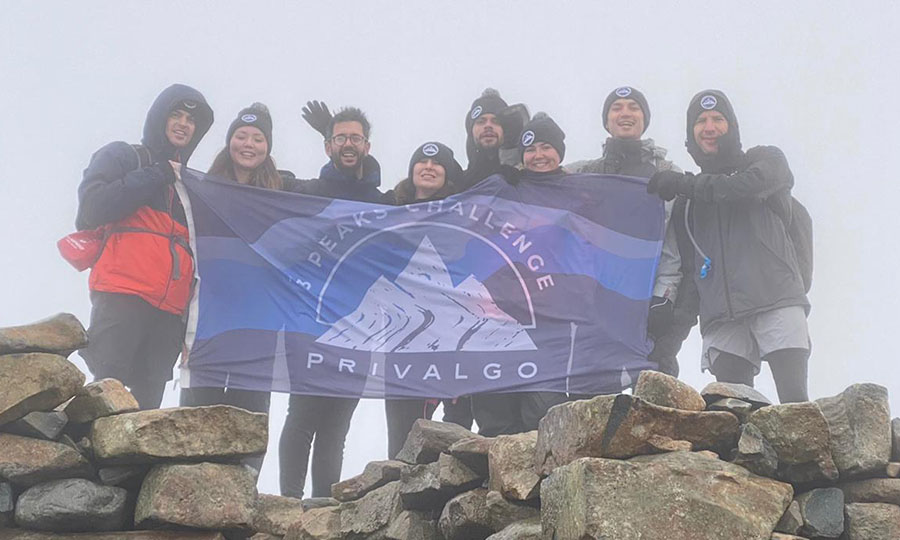 It was just after 5pm that we began our descent of Scafell Pike. We managed to catch the final moments of the sunset a little way down and made good progress. The darkness rolled in, and the legs got tired.

The journey up had been a smooth process, but we had one thing niggling in the back of our minds. So far, we’d managed to avoid getting caught in the rain, but Scafell had been hammered by wet weather before we arrived. This caused its rivers to rage.

We managed to cross one particularly tricky river with some good teamwork and a few pairs of wet boots on the way up – but getting through it in the dark was a cause for concern. Fortunately, with some thorough scouting from the team, we found a promising crossing point. With the river lit up by head torches and the team in position, we made it across.

Despite getting slightly lost on the way to the car park, the journey down was a resounding success. We hopped into the van around 8:15pm and set off for our final destination.

We arrived at our hotel near Mount Snowdon after 170 miles of driving through the night. Wearily, we crawled into bed for a quick kip before waking up bright and early for the finale.

From what we’d been told about the Three Peaks Challenge, Mount Snowdon was the easiest of the lot. It’s fractionally higher than Scafell Pike at 1,085 metres but the paths aren’t as steep, and the terrain is more merciful. For us, however, it was to be the ultimate challenge.

The calm before the storm

We probably should’ve seen what was coming when we launched our attack on Snowdon with a red weather warning from the Met Office. It was the first time we’d really felt the full force of the elements and our waterproofs were immediately put to the test.

Despite the warning signs, we knew there were only a thousand or so metres between us and mission accomplished. The clock read 9am at the foot of the mountain, giving us roughly four hours to reach the summit.

In true Wales fashion, the rain was relentless – and there was no shortage of wind either. It didn’t bother us much though, and we cracked on in good spirits. But the good times on Mount Snowdon were about to come to an end.

The tide turned for the team when a three-person family advised us to get off the path and take a more direct route up the mountain. We didn’t realise until afterwards that we’d be sent up the PYG track – known by hikers as the most rugged and challenging of the six paths up Snowdon.

We scaled a waterfall and scrambled over sharp rocks on our new route, bringing both a sense of excitement and fear amongst the group. The route may have been more enjoyable had we not been facing regular gusts of 40mph winds and bone-chilling hailstorms. There was no way we were turning back though, and we pushed on towards the top.

Cold and tired, we surfaced from the tricky PYG track and found ourselves on a long, flat plain leading to the summit. Up here, with no shelter from the mountain, the red weather warning made itself known. The wind speed cranked up to over 60mph and the whipping hail came at us sideways.

But we knew the end was in sight and the team braved the elements to slay our final adversary. Our attention now turned to the clock. Peeling back a sodden sleeve, we revealed the time…12:30pm.

We had completed our mission with 30 minutes to spare. 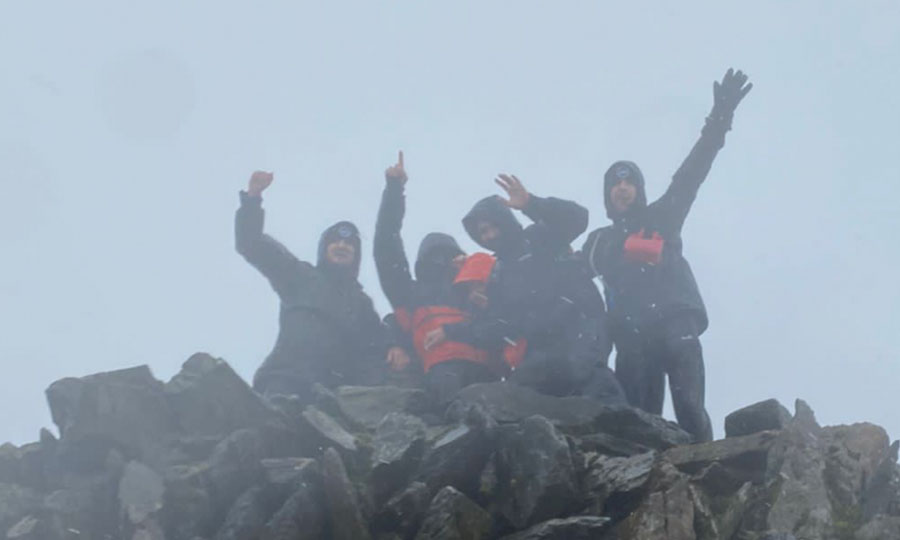 Shivering and exhausted, we made our way off the top of the mountain and took shelter in Mount Snowdon’s steam train station. The doors were locked so we huddled in the doorway and assessed our situation. Morale was low for the first time, made worse by the realisation that we’d be getting no assistance from the steam train on the way down.

The wind and rain raged on, and we knew we’d have to move swiftly to avoid putting ourselves in danger. We elected to follow the railway track to the bottom. It was a longer route, but considerably easier than the infamous PYG track.

Following the railway left us exposed to the harsh conditions. It was open, with little protection offered by the surrounding mountains. We carried on, moving as quickly as we could towards the base.

Eventually, two and a half hours later, we made it to the bottom. Soaked to the skin and completely out of gas, we grabbed our bags from the van and changed into some much-needed dry clothes. We had done it.

We set out to complete our Three Peaks Challenge in honour of Save the Children. We received some fabulous support and managed to raise a total of £3,124. Incredible.

Donations are still open, so if you would like to support, please follow this link to our Just Giving page.

We will be continuing our efforts to support Save the Children with future events, so keep your eyes peeled on our socials for updates.